A European airline is being condemned after a traveler made racist comments about another passenger that were caught on viral video. A crew member of the Ryanair flight from Barcelona, Spain, to London interfered, but the flight took off on Friday with at least one passenger wanting the unidentified man who made the remarks to be kicked off the flight.

In the video footage, a man in a window seat was seen saying he refused to sit next to an elderly woman seated in an aisle seat. The man hurled insults at the woman and called her an “ugly black b—–d” before the flight finally took off, according to a cell phone video recorded by London-based musician David Lawrence. 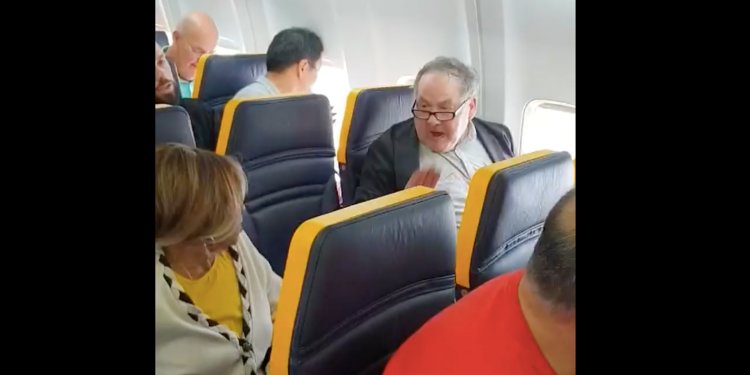 Lawrence posted the footage on social media on Friday.

On the video, the passenger can be seen threatening to “push” the woman to the other seat if she didn’t listen to him and moved.

“If that was another situation where that was a black man doing the same thing to a white woman, they would have escorted him off the flight,” Lawrence said. “He probably would have ended up in a Spanish jail even today.”

A spokesperson for the Essex Police, the local British police where the plane landed, could not be immediately reached on Sunday.

Labour MP David Lammy, who represents the Tottenham area of London, called for a boycott of Ryanair “if they think it’s OK for a racist man to abuse an elderly black woman and remain on the plane.”

“It’s 63 years since Rosa Parks said ‘No’ to sitting on the back of the bus and we ain’t going back,” Lammy wrote.

‘Get away from my seat’

Lawrence said he was settling into the flight to home from a business trip when he heard the argument. The woman was sitting two rows behind him on the other side of the plane; her daughter was a few rows behind her, Lawrence said.

“I heard a man’s voice behind me, very loud, very aggressive, shout, ‘Get away from my seat. Move your feet now. I need to pass,’ ” Lawrence recalled.

“I turned around and I saw this man standing over the elderly black woman yelling at her to get out of the way,” Lawrence said.

In an interview with Huffington Post UK, the woman’s daughter said the argument started when her mother, who has arthritis, didn’t stand up immediately from her aisle seat to provide a way for the man to get to the window seat.

Lawrence told CNN the woman’s daughter got up and came to her mother’s defense, saying she was elderly and disabled.

‘Someone needs to capture this’

It was then Lawrence said he grabbed his phone and started recording, as a flight attendant tried to intervene.

“None of the passengers were getting involved,” he said. “There was no one in authority around.”

He added: “And so, I thought, someone, needs to film this.”

He recalled some passengers “were laughing.”

“I couldn’t believe that I was on an aircraft in the year 2018 with this type of attitude and crowd, this type of behavior going unchecked, unpunished,” he said.

The woman’s daughter told the man not to shout at her mother.

“Don’t tell me what to do. If I tell her to get out, she gets out,” the man responded.

Later, he said: “I tell you, I hope somebody sits there because I don’t want to sit next to you,” and he pointed to the seat between them. Then he called her an “ugly f—ing cow.”

When the woman spoke to him in a Jamaican accent, he responded, “Don’t talk to me in an f—-ing foreign language, you stupid, ugly cow.”

A passenger sitting behind the man tried to interfere and requested him to stop.

“I will carry on as far as I can with this ugly black b—–d,” the man responded.

The flight attendant told the man to calm down and said he would talk to his supervisor.

The Untold Story of NotPetya, the Most Devastating Cyberattack in History

‘Human-like creature’ in Canadian woods sparks panic: ‘Is that Gollum ?

Check List Of The Most Gorgeous, Beautiful Women In The World...

Archaeology Facts About The Pyramid Of Giza!!

This 13-Year-Old The Tiny Builder Did Unbelievable

Some Facts you need to know about Cast of Bonanza