A video has gone viral on social media that shows a deep-sea chicken-like creature swimming in the frigid waters of Antarctica for the first time. The video has shocked netizens because the creature looks like a “headless chicken sea monster”. 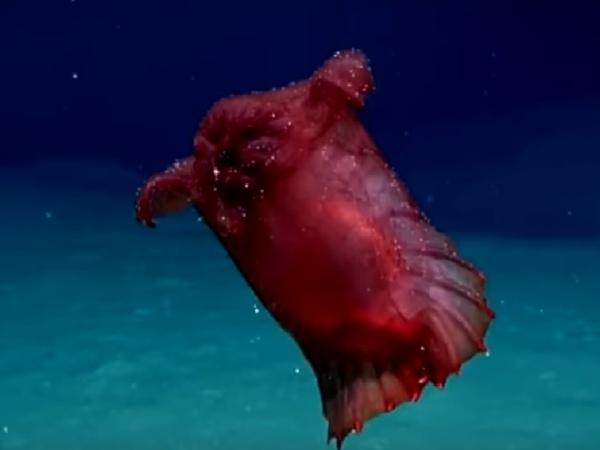 The creature was captured on camera by Australian researchers using the new underwater equipment. It was identified by marine life experts as a species of sea cucumber, Enypniastes Eximia, reported The Independent.
Ranging in size from 11cm to 25cm, the creature was filmed only once before in the Gulf of Mexico at a depth of 2,500 meters.

Researchers were thrilled to see the creature which has webbed swimming structures and tentacles.
“Some of the footage is breathtaking which we are getting back from the cameras is breathtaking, including species we have never seen in this part of the world,” Dr. Dirk Welsford, programme leader at the Australian Antarctic Division, told the newspaper.

In the video, the creature can be seen moving along the sea floor while feeding.
Unlike sea cucumbers, the creature is very active and spends a lot of time lurking around 50m above the seabed.

It looks transparent and has a barrel-shaped body with ‘a large webbed vampiric veil made up of 12 conically-shaped podia, or feet, at the front of its body’, reported Extreme Marine.
The veil is said to provide a lift to the creature while it is swimming.
The creature can also glow and throw up its internal organs to fend off predators.
According to Extreme Marine, it spends most of its time swimming and feeds along the seabed.

Some Weird Movements In The Garden After The Burglary At Home

Samsung, MediaTek considered by Apple to supply 5G modems for 2019...

Some Facts you need to know about Cast of Bonanza

Someone finally adopted this abused dog

This Couple Transformed A School Bus Into Something Unimaginable!